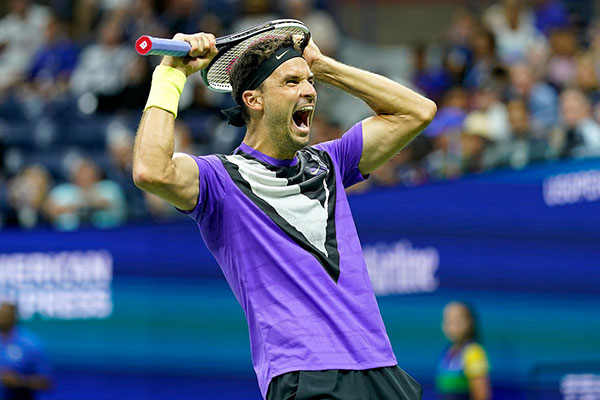 Grigor Dimitrov came from 1-2 sets to shock the five-time US Open champion Roger Federer 3-6 6-4 3-6 6-4 6-2 and advanced to the semifinals at Flushing Meadows for the first time in his career. This is the first win of the Bulgarian of the 8 matches against Federer.

"I think the past six, seven months have been pretty rough for me. But I had somebody to lean on, my friends, my family. I kept on believing again in the work, the rehab I had to put behind my shoulder, the exercise, the practice, fixing up the racquet a little bit. There were so many things I had to adjust in such a small but big period of time," Dimitrov said. "Next thing you know, you're almost [at the] end of the year, you have a result like that. It's pretty special to me."

In the semifinal, Grigor Dimitrov will play fifth seed Daniil Medvedev of Russia. In the two matches so far Dimitrov won in 2017 at Queen's club and Medvedev beat in Washington in 2017.

#0: OMG..... Grigor is back. Ти си гордостта на БЪЛГАРИЯ.... Не знам дали наистина осъзнаваш колко си важен за българите по света и за тези в БЪЛГАРИЯ. I left Bulgaria over 10 years ago and sence then you have been my motivation in everything I do. I have lost jobs because my bosses wouldn't let me take off so I can watch you. For some reason I just believe in you,every time I watch you and see the Bulgarian flag next to your name makes me cry of joy. When you win I cry again and when you lose I probably take it harder then you.
You have the arsenal to hurt any player on any day, you have the experience from beeing high and beeing low.
Now you have to put it all together and use it because this is your moment. Play your game and don't get distracted, be Stone cold and let emotions take over you only and only after the last match point of the match.
Well.... Keep on mind that Daniil is Russian and we do love them for giving us the freedom 120 years ago. Respect.
But again this is your moment. SMASH.