Grigor Dimitrov vs Andy Murray at the Quarterfinals in Thailand 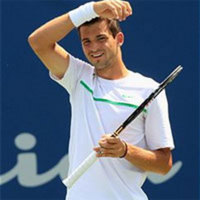 Grigor Dimitrov will play world No 4 Andy Murray of Great Britain at the quarterfinals of PTT Open in Bangkok, Thailand, on Friday, 30 September.

In the second round Grigor Dimitrov defeated the qualifier Simone Bolelli of Italy, No 138, in two sets within 1 hour 38 minutes with a result of 7-6(8) 6-1.

By reaching the quarterfinals Dimitrov gained 17'400 USD of the prize money and 45 ranking points which would position him to around No 70.

The match against Murray will be Grigor's 6th match against Top 10 player. So far Dimitrov took 1 set in the matches against Nadal, Monfils, Simon, Ferrer and lost in straight sets in a second match against Simon.

#2: You can take him. Young did it. Murry is good but not unbeatable. Go man! Go for the win.

#1: the shorter the point the better for you. Murray returns evvverything and he is not afraid to into a 30 shot rally. Try serve and volley, you are super good at the net. go go go believe it

#0: strategy to beat Andy Murray? Use Nadal's, and Top Spin every shot.
You can’t beat him with two shots. You have to enter long rallies nearly every point, and the longer they go, it usually means Nadal has the edge. Murray wasn’t able to dominate
from the baseline too often during the match, a tactic that usually gains his most of his limited success against the 2010 US Open champion.
Try to out-angle him. Also use Nadals slice serve to his backhand.
Good luck!