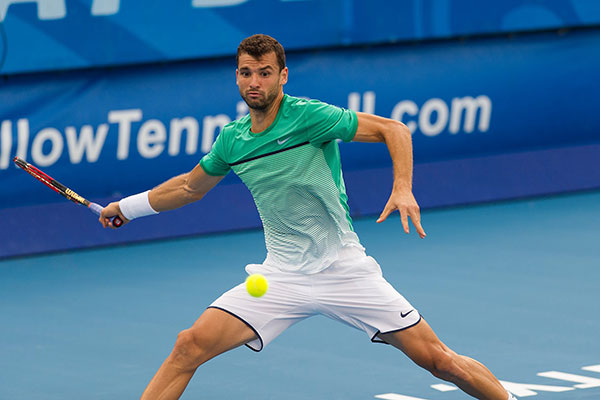 Grigor Dimitrov advanced to the second round of Delray Beach Open after beating the Israeli Dudi Sela 6-4 6-2. Dimitrov needed one hour and eight minutes to reach the 4th at ATP World Tour level match over Sela. The Bulgarian scored only 51% success of his first service but lost only two of the 24 of those points and never faced a break point.

"I knew that I have to really focus because Dudi’s an experienced player.As a one-hander, it’s especially tough to control the ball. It’s one of the burdens to having a one-hander that in the windy and tough conditions you can’t hit your shot the way you want to hit it." Dimitrov said. "There was a lot to learn. I started the year positive, happy. I’m enjoying it again. Even when I’m practising down in Miami on Court 10, no one out there, I’m happy to come out on the court and play. I’m not trying to discourage myself too much and just move forward."

The second round opponent of Dimitrov will be decided on Tuesday between Damir Dzumhur of Bosnia and Herzegovina and Ricardas Berankis of Lithuania.

#0: I'm NOT impressed with what I'm seeing in Grigor's game. Something is missing!! ....maybe a few things. I thought i saw serious top 10 potential but that seems completely gone. He better get his act together REAL fast or he might become a *Major* washout. If he REALLY wants to be #1 (and that is a BIG *IF*) ...or even #5, changes need to be made and being neck deep into social media, having lots of fun, partying, etc, etc, WON'T cut it.

His time is running very short and he needs to make a decision to give it a 125% effort ....*or* be TOTALLY prepared mentally and possibly financially to suffer the aftermath. Does anyone know if his coaches are "right" for him?