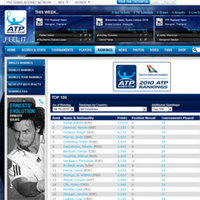 In the ATP ranking of 4 October 2010 Grigor is ranked 135 despite he did not play and did not gain any new points last week and this is his new personal top ranking. Dimitrov has 414 points - equal to the points of Peter Luczak (Australia) and Ilija Bozoljac (Serbia).

The only change in Top 100 is the swap of positions of Mikhail Youzhny (Russia) who goes ahead of Fernando Verdasco to No 8. Rafael Nadal of Spain is No 1 ahead of Novak Djokovovic of Serbia and Roger Federer of Switzerland.

#0: I expected to see Dimitrov in Mons Challenger in Belgium...
Any problem or injury? Just a couple of weeks rest after asian season?