Grigor Dimitrov with New Coach in 2012 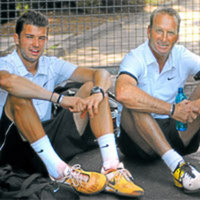 Peter McNamara will no more coach Grigor Dimitrov. The Patrick Muratolglu Academy announced that the 1.5 years coaching relationship of Dimitrov with McNamara is over. The Australian McNamara helped Dimitrov to reach his best ever ranking of No 52. The academy will hire a new coach for Grigor Dimitrov in the upcoming weeks.

With most of the athletes of the Muratoglu Academy Grigor Dimitrov will leave for the island of Mauritius for a training session before the new season.

#3: I agree with the comment about Salzenstein. Living in Colorado, I've seen him coach first-hand, and he's amazing. As a former top 100 player, he's a student of the game, and a wonderful guy.

#2: Man, somebody will invest in you and he will be one lucky dude because you are top 10 potential, Grigor. He must get the best out of you and we know you will work hard to get there. Out of so many players they only call you The Baby Federer. They know...

#0: Jeff Salzenstein will be happy to help with coaching I believe.
http://www.jeffsalzensteintennis.com

It is time to invest in your development as a player.
Perhaps you should look for someone who can bring you to the top in two categories:
- Serve
- Serve Return