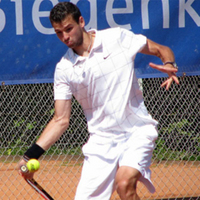 Grigor Dimitrov won the final of the 10K USD Futures in Trier Germany as the title is 4th for the best Bulgarian tennis player. Dimitrov defeated Seed 3 the BelgianDavid Goffin in 3 sets4-6 6-1 6-4. Grigor will be around No 290 in the next ATP ranking after gaining 18 ranking points for the title.

Next week Grigor Dimitrov will play in Modena, Italy, at 10'000 USD ITF Futures.

#1: This the new beginning of his career. Good luck in Modena!