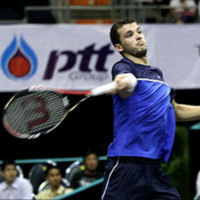 World No 4 and Seed 1 Andy Murray of Great Britain defeated Grigor Dimitrov in the quarterfinals of the ATP 250 tournament in Bangkok, Thailand. Grigor Dimitrov showed very good tennis but the experience of Murray helped him to reach the final score of 6-4 6-4.

"I served well again," said Murray. "He started the match pretty well and once I served a couple of break points in my second service game, the momentum was then with me for a lot of the match. I did not give him too many opportunities on my serve. Returning is normally one of the strongest parts of my game, so when I served well I tended to put pressure on him and he missed a few shots at the end of both sets."

Grigor's score against Top 10 players is now 0 wins and 6 losses. The points that Grigor will add to his ranking balance will move him up to position around 70 in the next Monday's ATP ranking.

#0: Good game, congratulations!
It is just about a bit more time before you are going to win against big players like Murray.