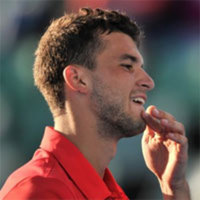 Grigor Dimitrov left Australian Open after 5 set defeat by world No 10 Nicolas Almagro of Spain. The match lasted 3 hours 29 minutes and Grigor took the lead in sets twice. Before the last set Grigor left the court for medical timeout for pains in his right leg. Dimitrov was not able to respond as in theprovisossets and lost it 0-6. This way this spectacular match was taken by Almagro 4-6 6-3 6-7(4) 6-4 6-0.

The Bulgarian gained 33'300 dollars for his participation and 45 ranking points which will not cover the 70 point of last year which lead to losing of several ranking positions after the end of Australian Open. Dimitrov is the player's list of a series of tournaments in the USA from 13 February on.

#1: i stayed up til 5:30 AM watching the match, although the outcome was unfortunate I still think youre gonna have a great year! keep it up! there is plenty of people cheering you on, win or lose

#0: Unfortunately I was unable to watch the match, but considering the scoreline and all the comments Grigor should've won it...if it wasn't that injury blow... What a pity... Never mind, this things happen... Keep up the good work Grisha! I wish you quick recovery and all the best in a future!