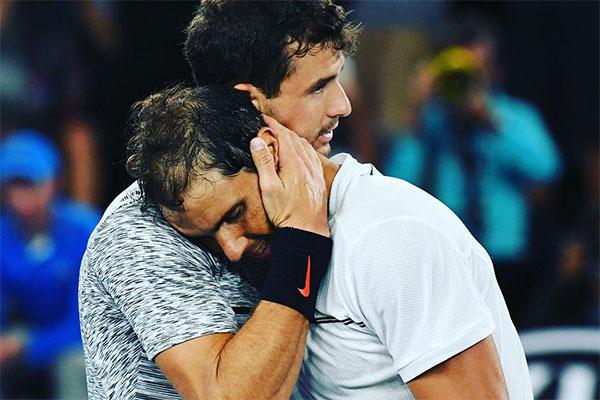 "Dimitrov won. Nadal won. Everyone at RLA won. These kind of matches lift our sport up onto its shoulders. They are a gift we can enjoy every single day of the year." wrote Craig O'Shannessy, Australian Open Expert "It was an epic encounter that could have easily seen Dimitrov finish the victor. In fact, the Bulgarian arguably played the match of his life, but walked away with a loss. Tough loss."

After 5 hours of play Rafael Nadal guaranteed his place in the final after winning in 5 sets6-3 5-7 7-6(5) 6-7(4) 6-4. The Spaniard will flight Roger Federer on Sunday for the trophy of Australian Open.

After this excellent appearance Grigor Dimitrov will be either 12th if Rafael Nadal wins the title or 13th - if Roger Federer wins in the next Monday's ATP Ranking.

The Bulgarian fans of Grigor Dimitrov will not wait long to enjoy more of his brilliant play. Dimitrov will definitelybe the most applauded by the home crowd during Sofia Open in Arena Armeec during the week of 6 February. The other stars of the main draw will be Dominic Thiem, David Goffin, Roberto Bautista Agut, Viktor Troicki, Philipp Kohlscreiber.

#1: AMAZING! CONGRATULATION! I should have played the piano at that time, but instead I watched you playing, and it was worth any minute! You have really all the qualities to become World N: 1- tallent, physic, character, charme, ambition. In adition you have a TOP coach. If you continue to play the way you did today, soon you'll become N: 1. Than the most difficult will be to remain N:1 for many years. There is nothing more sexy than the success!!! Pity that today you didn't win the game, but this is not a problem. It happence now and than to anyone not to get what one desirves...but all your fans we love you still the same!

#0: Grisho you are the best! Incredibe performance! Not many players in the world can play as you did. You only can improve and we hope we will see you next year winning the GS. Dani Vallverdu is your future! Good luck!