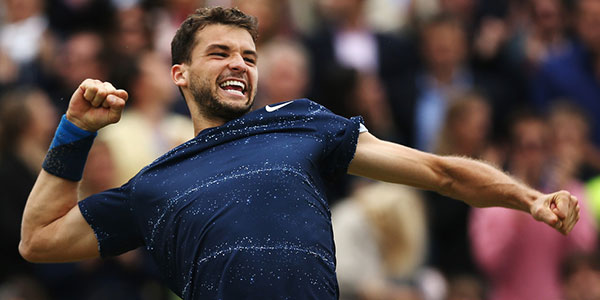 In this year's edition of the Championships, the 3rd Grand Slam tournament of the year in London, Grigor Dimitrov will start against No 141 Ryan Harrison of the USA. The possible second round opponents for Dimitrov are Luke Saville of Australia, No 233, or Dominic Thiem of Austria, no 55. Grigor Dimitrov is seeded No 11 and would meet another seeded player in the 3rd round of the tournament and it is No 19 Alexandr Dolgopolov of Ukraine. The quarter of the main draw of Dimitov and Dolgopolov is lead by Andy Murray and includes also Roberto Bautista Agut, Kevin Anderson, Fabio Fognini and David Ferrer.

Top seed Novak Djokovic will start against Andrey Golubev and would meet Jo-Wilfried Tsonga in the eighth-finals and Ernests Gulbis or Tomas Berdych in the quarter-finals. Roger Federer leads the third quarter. The other seeded players in the same quarter are Stan Wawrinka, Dmitry Tursunov, Feliciano Lopez, John Isner, Jerzy Janowicz, Tommy Robredo and Marcel Granollers. World No 1 Rafael Nadal will start against Martin Klizan and could meet Ivo Karlovic in the third round, Gasquet or Monfils in the eighth finals and Nishikori or Raonic in the quarter-finals.