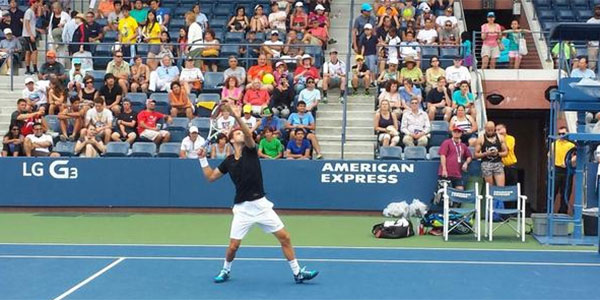 Grigor Dimitrov is No 7 seed of the main draw of the 4th Grand Slam tournament of the year. Dimitrov won the boy's singles title in 2008 but was not lucky in the main draw matches so far - last year he lost to Joao Sousa of Portugal in the first round. In 2012 and 2011 Grigor could not advance to the second round after losing to the Frenchmen Benoit Paire and Gael Monfils respectively.

In this year's edition of US Open Grigor Dimitrov will start against Ryan Harrison of the United States. Dimitrov won the only match against Harrison in the first round of Wimbledon earlier this year. The possible next opponents for Grigor are Carlos Berlocq of Argentina or Dudi Sela of Israel in the second round. In the third round Dimitrov could meet No 32 seed Joao Sousa to whom he lost last year.

If Dimitrov reaches the quarterfinals he would play No 2 seed Roger Federer. The other seeded players in the fourth quarter of the draw are Sousa, Monfils, Gasquet, Fognini, Bautusta Agut and Karlovic.