Second Title for Grigor This Year 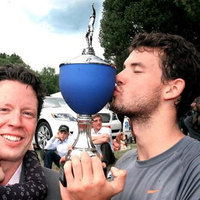 Grigor Dimitrov won the title of the ITF Futures in Dortmund, Germany, which is second for this year and 5th in his career. In the final match on Sunday Dimitrov defeated the GermanJan-Lennard Struff 7-5 7-5. Grigor will add 35 rankingpointswhen the ATP ranking is announced on 9 August. Dimitrov was not able to play in the qualifications of the ATP Challenger in Segovia where he reached the quarterfinals last year and has to defend 25 ranking points.With adding and removing the respectivepointsit is expected Grigor to be ranked between 270 and 265.

Dimitrov applied for participation in the 15'000 USD ITF Futures in the town of Irun, Spain which will be held during the week of 9 August 2010.

#0: Grigor, congratulations for the victory, but we really miss you in El Espinar (ATP Segovia Challenger). I think you should have made it to Segovia to defend your last year quarterfinals.
I wish we can see you very soon playing (and winning) at higher level tournaments.
Come on, Grigor.