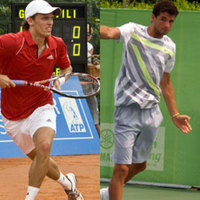 In the first round of the 106'500 EUR ATP Challenger in Helsinki, Finland, Grigor Dimitrov will play Seed 1 Tobias Kamke of Germany. Th 24-years-old Kamke is No 67 of the ATP ranking which is his best ever position. In 2010 the German made a jump of 187 positions starting from 254 in January.

Dimitrov played Kamke once in the 1st round of thequalificationsof US Open - Dimitrov won 6-3 7-5.

If successful in the second round Dimitrov would play the winner of the math between the Russians Konstantin Kravchuk, ATP Rank 129, and Alexander Kudryavtsev. Dimitrov defeated both of them in the consecutive finals atchallengersin Bangkok, Thailand.