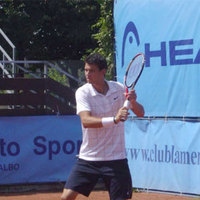 Grigor Dimitrov won his 6th tournament title after defeating Seed 1 the Spanish Sergio Gutierrez-Ferrol in 3 sets 4-6 6-3 6-4 in the Spanish town of Irun at 15k USD Futures. This was 6th final and 6th subsequent title in the career of Grigor. Dimitrov gained 27 ATP ranking points which will be added to his balance on 23 August and Dimitrov has chances to improve his best ever ranking.

Dimitrov missed the qualifications of the Challenger in San Sebastian, Spain which started today and his next tournament most likely will be the 30'000 EUR Challenger in Geneva,Switzerlandduring the week 23 August 2010.

#1: Congratulations, Grigor! Six title out of six finals. Really awesome, even for Futures tournaments.
Such a shame Grigor couldn't make it to San Sebastian Challenger. Last direct acceptance for main draw closed in number 279 while Grigor was ranked 281. It's a pity and I think you deserved a wildcard. Bad for the organizers if they refused.
Now, good luck in Padova.

#0: Congrats！ You did a really awesome job. Six subsequent title, wow, what a fabulous efficiency!
And keep going!