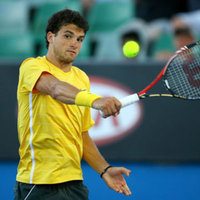 In the first round of the qualifications of Sony Ericsson Open, the ATP Masters in Miami, USA, Grigor Dimitrov defeated Rik de Voest of South America 6-4 7-6(2). This was the second participation of Dimitrov at Masters tournament after Madrid in 2008 and first ever win. For advancing to the second round of the qualies Grigor gained 8 ATP ranking points.

In the main draw entry decisive match on Tuesday Dimitrov will play Nicolas Massu of Chile, ex No 9 veteran.