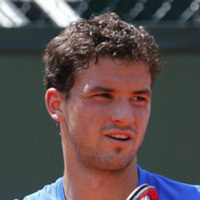 Grigor Dimitrov left Roland Garros after the loss in 3 hours and half match by Richard Gasquet, France. Dimitrov demonstrated superb tennis, the match can be named as the best ever in his career. Grigor succeeded to take the first set 7-5 but it was world No 20 Gasquet who won the next 3 sets and advanced to the third round 5-7 7-5 6-2 6-3.

The points from his participation at Roland Garros will position the Bulgarian at around No 71. Dimitrov till has good chances to enter the Olympic tournament.

The next tournament of Grigor is at Queen's Club in London on grass from 12 June.

#2: i still cant over how bad that first sentence was, that thing was butchered! If I were an english teacher this would be a perfect example of what NOT do to. its so terrible its funny!

#1: what the...did a two year old write this? you guys really need to fix the grammar, heck I will do it for free! You sound stupid and it looks really bad for grigor, who I know can speak english way better than this... anyway back to grigor, good tournament and good luck in london!