The road back, Dimitrov’s journey to recovery and competition is a familiar one 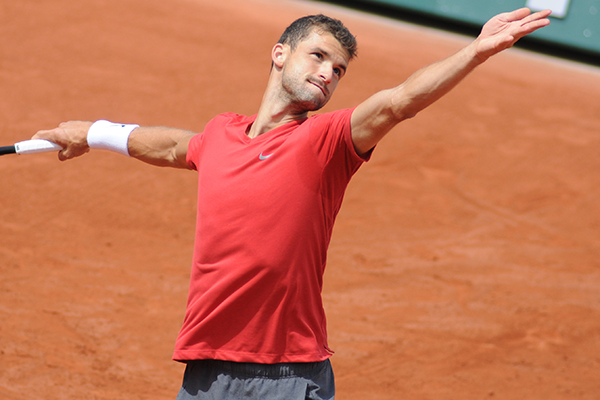 Grigor Dimitrov’s rise and fall through the ATP ranks is a familiar story, one of many ebbs and flows to feature in a men’s field that is steeped with depth, quality and talent. It’s a story of perseverance, determination and grit in the face of various trials and tribulations; a story of joy, accomplishment and victory as well, one that is far from over and may yet write many more triumphant chapters, including major success.

At the culmination of the 2017 ATP season, Grigor Dimitrov, arguably, pulled off the best title victory of his career when he clinched the ATP World Tour finals by beating David Goffin in three-sets. In winning the prestigious title in London’s O2 Arena, the Bulgarian reached a career-high ATP ranking of No.3. But for those initiated tennis fans, experts and analysts, the victory went deeper than that and beyond simply ascending a podium to lift one of the game’s most prestigious trophies. It was held a signal of intent, a gauntlet throwing victory for the upcoming season.

Carrying the moniker of “Baby Fed” (as the Bulgarian was often dubbed since his junior days) brought with it a level of expectation that Dimitrov clearly struggled to live up to since turning pro in 2008. It may well have been a burden he’s carried on his shoulders all this time. This isn’t to say that he’s without any accomplishments. On the contrary, he can be well proud of flying his country’s flag high in the sport.

Admittedly, though, well and good as all those achievements are, more was always expected of the promising talent that was forever being compared to the maestro of tennis, the GOAT to some, Roger Federer. Waxing lyrical about having one of the most sublime backhands in the game and incredible shot-making abilities. There’s absolutely no shot that’s not in his arsenal of weapons. He’s one of the most organically talented players to ever wield a racquet.

So, it was only natural that winning the ATP Finals was a welcome triumph, even – dare it be said – a belated one. Dimitrov had finally arrived onto the big stage and he was here to stay. He was finally ready to contend for Grand Slam titles against the ‘Bosses’ of the game: Federer, Nadal and Djokovic, who have greedily lapped up major titles since bursting on to the scene.

Alas, that promising prophecy failed to come to fruition, seemingly eluding the Bulgarian at every turn yet again, something that has caused his litany of fans much heartache and disappointment. There have been 9 majors since his win in London, none of which went his way. Suppose that they were all divided up between the so-called ‘Big Three’ is just a testament to their supreme dominance in the game rather than a critique of any of Dimitrov’s short-comings. After all, he’s not the only one that has struggled to gate-crash the party.

The start to 2018 was bright with a semi-final appearance in Brisbane (l. to Kyrgios) and a quarterfinal run in Melbourne (l. to Edmund) followed by a runner-up finish to Federer in Rotterdam. From then onwards, though, Dimitrov’s struggles with form took over, culminating with a steady fall from grace. He endured a mixed run during the clay-court swing and then deposited one of his worst grass court accounts since 2010, followed by a frustrating US Open Series. He rounded out the term by going 2-3 (W-L) in his last four tournaments in autumn (including Laver Cup). By the end of 2018, Dimitrov had slipped to the fringes of the Top 20.

The dawn of a new season is always a welcome reprieve. It brings with it a tabula rasa – a clean slate. Hope springs eternal at the start of the season, the possibilities seem limitless. Ranked just within the Top 20, Dimitrov belonged to those group of hopefuls with a legitimate shot to kickstart their 2019 campaign in fine style. Alas, it wasn’t meant to be because it brought more strife in the form of injury, a shoulder injury that would be so serious it would side-line the Bulgarian for several months.

Fast forward to the 2019 US Open, six losses in seven matches preceding the final major event of the season, and Dimitrov was down to 78th in the World without anyone holding out much hope for his chances after recovering from a shoulder injury.

To the surprise of everyone, including oddsmakers that had all but written the 28-year-old off, Dimitrov endured his best US Open ever by reaching the semi-finals. Now, it’s worth pausing here for a moment to elaborate on the surprise aspect of his run. That is, the surprise here wasn’t that he reached the semis (the talent to do so was always there) but rather the timing, coming off an injury and going into the event in poor form.

Granted he had a bit of help from a favourable draw, not least Borna Coric retiring with a bad back in the second round to give Dimitrov a free pass into the third round. Yet, nobody can takeaway from him his epic five-set victory over Roger Federer in the quarterfinals. It was the highlight of his 2019 season, which he later backed up with a runner-up finish at the final ATP Masters event in Paris (l. to Djokovic).

Another term, another tabula rasa with the 2020 ATP season well underway. Currently ranked No.22, Dimitrov’s start to 2020 has been a mixed bag. Leading into the spring American hard-court swing, represented by the Masters double at Indian Wells and Miami – which is tennis’ answer to March Madness, so hugely popular on this side of the Atlantic pond – Dimitrov sports a 4-4 win-loss record on the season. It’s modest, to put it mildly.

But is that a reason to dismiss the Bulgarian for upcoming events? When he has shown time and time again he can light up at a moment’s notice, perhaps he’s just one of those mercurial players that gets on a hot streak from time to time. (Not everyone is a Federer, Nadal or Djokovic and holding all players to such stratospheric levels is a bit unfair).

Fast surfaces suit Dimitrov’s game best, making him an outlier bet to always keep on the backburner when Wimbledon and the US Open come around. How he plays at the upcoming Indian Wells and Miami Masters next month though could prove most telling where his form and confidence are as the season heats up.