Triumph for Grigor Dimitrov at Cherbourg 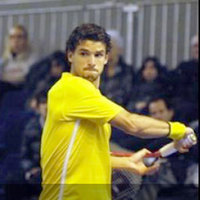 Grigor Dimitrov won the title of the 42'500 EUR ATP Challenger in the French town of Cherbourg. At the final match Dimitrov defeated Nicolas Mahut of France with a score of 6-2 7-6(4). Grigor took the first set within 23 minutes. The second set started with brakes by Mahut, the it was Dimitrov who broke and then Mahut broke again to lead 2-1. When the score was 5-5 the service game of Grigor lasted 10 minutes after 6 deuces and one saved break-point to 6-5. In the next game Grigor had 5 match-balls but could not win any of them and the set had to be decided by tie-break. Dimitrov won it 7-4 and this way the match and the tournament title.

Dimitrov won 6150 EUR of the prize money and 90 ATP ranking points which would move him to around No 71 on Monday.

The title in Cherbourg is 10th in his career among them 6 ITF Futures and 4 ATP Challengers.

Next week Grigor Dimitrov starts at the 30'000 EUR ATP Challenger in Sarajevo, Bosnia and Herzegovina, as Seed 1 of the main draw. The opponent of the Bulgarian in the first round is the Slovak Karol Beck, 28 years old, current ATP rank 143. Back in 2005 Beck reached No 36.