Wawrinka Defeated Dimitrov in the Second Round of Australian Open 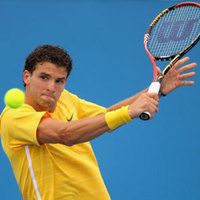 Seed 19 Stanislas Wawrinka of Swizterland defeated Grigor Dimitrov in the second round in Melbourne in 3 sets 7-5 6-3 6-3. Dimitrov will leave Australian Open with $32'000 of the prize money and 70 ATP ranking points which will make him the best ranked Bulgarian ever. Orlin Stanoychev succeeded to reach No 96 back in 2000.

The next tournament that Girogor Dimitrov applied for is ABN Amro ATP Tour 500 tournament inRotterdam, the Netherlands from 7 February as Dimitrov would start from the qualifications. In 2009 in Rotterdam Grigor Dimitrov made the sensation by winning Berdych and took a set of Nadal.

#1: Don't worry about having lost against Stan and go on improving your game! And don't give up when something doesn't happen like you'd like to do... you've a great future in front of you!

#0: ok FIRST.. dude you need to work on your mind. You stopped fighting from the middle of the second set on. You just stopped fighting. You had him running from side to side on the first set.. your baseline game was much better than his, but you lost a couple of important points at the end of the first set and at the beginning of the second and you gave up.. just like that.

SECOND, stop arguing when your balls are called out.. it's not cool

THIRD, what a great technique bro