106 is the Ranking of Grigor 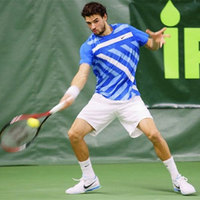 Grigor Dimitrov moved to position No 106 in the ATP ranking announced on 29 November after his last tournament of 2010. This is new best ever rank of the young Bulgarian.

The Bulgarians following Grigor Dimitrov in the ranking are: Tihomir Grozdanov - at 563, Dimitar Kutrovsky - 568, Todor Enev - 775.

The only change in Top 10 is the swap of places of Andy Murray, Great Britain, who goes to No 4 and Robin Soderling, Sweden, - No 5. Rafael Nadal, Spain, is No 1 ahead of Roger Federer, Swizterland, and Novak Djokovic (Serbia). Positions from 6 to 10 are occupied by Tomas Berdych (Czech Republic), David Ferrer (Spain), Andy Roddick (USA), Fernando Verdasco (Spain), Mikhail Youzhny (Russia).

#1: It's still not 100% sure. There must be players that withdraw from the acceptance list so that his main draw place to be guaranteed.

#0: is Grigor gonna play in the main draw in the Australian Open?