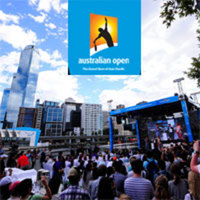 Grigor Dimitrov will start against Seed 32 and rank No 35 Julien Benneteau of France in the starting round of the main draw of the first Grand Slam tournament of 2013 Australian Open in Melbourne. The highest ranking of Benneteau is 26 reached in April 2012. Dimitrov beat Benneteau twice of two matches played before - very tight matches in Basel and Gstaad in 2012.

If successful at the start Dimitrov would play Edouard Roger-Vasselin of France, No 101, or qualifier.