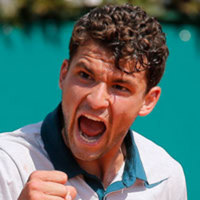 World No. 34 Grigor Dimitrov is through to the third round on his main draw debut after upsetting 8th seed Janko Tipsarevic of Serbia 7-6(3) 6-1. The Bulgarian rallied from down a break at 5-4 in the first set and finished strongly to close out victory in 1 hour and 34 minutes.

This is second win of Grigor over Top 10 tennis player from 20 matches he played so far. Last year at Miami he beat then No 7 Tomas Berdych.

With the 90 points that he added to his balance Grigor has all the chances for debut in Top 30 depending on the performance of Fabio Fognini, Marcel Granollers and Jurgen Meltzer.

The 3rd round opponent of Grigor is to be decided on Wednesday between Florian Mayer of Germany and Roberto Bautista Agut of Spain.