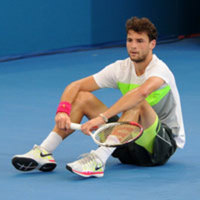 Grigor Dimitrov showed nothing of the great play of last week which lead to a crushing loss by No 47 Fabio Fognini 3-6 1-6. No points will be added to the ranking balance of the Bulgarian. The next match of Dimitrov is at the first round of the main draw of Australian Open in Melbourne. His opponent's name will be published on Friday when the draw ceremony will be held.

#0: Perhaps he lost the match because of his eagerness to be at Melbourne with Sharapova! :) Do well in this year's AO, Grisho!