Grigor Dimitrov Advanced to the Quarterfinals after Defeating Ex No 3 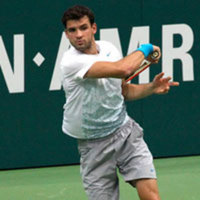 Grigor Dimitrov defeated ex No 3 Nikolay Davydenko of Russia in two sets 7-5 6-3 in the second round of the ATP 500 tournament in the Dutch city of Rotterdam. This is the second time when the young Bulgarian reached quarterfinal of ATP 500 tournament, last October in Basel Grigor lost to Paul-Henri Mathieu of France.

Dimitrov will for sure reach a new best ever position (around 36) with the 90 points gained for reaching this level of the tournament. He also gained 31'500 EUR of the prize money.

The opponent of Dimitrov will be determined on Thursday between Seed 4 Richard Gasquet of France, No 10, and Grigor's doubles partner Marcos Baghdatis of Cyprus, No 36. The quarter final match is scheduled for Friday.