Grigor Dimitrov Beats Bernard Tomic at the Start in Rotterdam 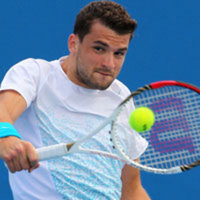 In the first round match of ATP 500 tournament in Rotterdam, the Netherlands, between Grigor Dimitrov and Bernard Tomic, dubbed the battle of the youngsters, it was the Bulgarian who prevailed. Dimitrov won in three sets 6-3 3-6 6-3.

Today's match brought to Dimitrov 45 ranking points which will bring him back to Top 40 and depending on the performance of the other players he could also reach a new best ever position. €16'000 will be added to the prize money of Grigor.

Later today the match between Florian Mayer and Nikolay Davydenko will decide the opponent of Dimitrov in the second round on Wednesday.

On Tuesday (not before 3:30 PM CET) Grigor DImitrov / Marcos Baghdatis will play Julian Knowle / Filip Polasek in a match of the first round of the doubles tournament.